Splat…splat…splat. Over and over. Butterflies. Mile after mile of hundreds and hundreds of butterflies. The painted ladies are doing well this year. Unfortunately for them, their migration route is intersected by Interstate 40. Here, outside of Ludlow, California, I’m committing vehicular lepidopteracide at an alarming rate. In a manner that is both macabre and hypnotic, I’m captivated by the split second before each impact when time seems to stop: the butterfly hovers mid-flight only feet away in crystal clear profile against the blue, late-morning sky, orange wings outstretched as it strives towards its singular purpose, oblivious to impending calamity. That suspended instant unfailingly passes as Chronos reasserts his reign and 3,000 pounds traveling at 75 miles an hour collides with 0.5 grams of Vanessa annabella. In a most unnatural metamorphosis, butterfly transforms into yellow smear on windshield with an onomatopoetic splat.

Crows line the highway, feasting on carcasses. At rest stops, every car appears to be covered in egg yolks or to have been shot with yellow paintballs. I think of the thousands of vehicles daily covering this stretch of interstate and wonder at how many butterfly fatalities that must add up to. Of unintended consequences in this seemingly desolate landscape of high desert. Of how I-40 killed Ludlow itself – now with a population of 10 and consisting of a gas station-cum-Dairy Queen – when it superseded Route 66. Of how I came to be driving it at that moment, saying goodbye to more than just butterflies and ghost towns.

I was in the midst of a departure or a fleeing. Perhaps it could be best described as an abrupt rupture. In the span of ten days, the seemingly sturdily built scaffoldings of my life collapsed. The clear-cut path actually led right off a cliff. In that brief duration, my marriage, job, and housing situation all came to unexpected, and in some cases quite painful, ends. Rotating between the sadness of the past, shock of the present, and anxiety of the future, I latched on to one coherent thought telling me to go to my parents’ house and regroup. So, there I was on I-40, screaming and crying and murdering butterflies.

Life is most often experienced linearly, an accumulation of time occurring between two definitive points. Another model suggested to me which I’ve found it helpful is that of life as a spiral. As the spiral expands with the passing of time, we often encounter circumstances in our present moment that are similar to those we’ve encountered in the past, be they material, psychological, social, or biological.

By way of visualization, imagine the red spiral below to be one’s life. (Beginning appropriately here at ordered pair (0, 0), the origin point.) And imagine each point where the spiral intersects the positive y-axis to symbolize three different encounters with a similar circumstance. The hope of the spiral is that while the circumstance is similar (expressed here as x=0 at each of those three points), we will have grown in the time since the last encounter (expressed here as an increase in the value of y), and thus with each new encounter handle that similar circumstance in a different, healthier, and more constructive way than the time prior. Were we to encounter similar circumstances and react the same way each time, then instead of a spiral, life would be a circle, a closed system of repetition with no growth.

The spiral has been on my mind as, while I’ve never experienced this trifecta of disruption before, a common occurrence for me has been that of starting over. As such, I’ve been paying close attention to how I navigate this moment. Of course, none of these experiences are particularly unique. In the U.S. on average, people move 11 times in their lives, change jobs 12 to 15 times, have 7 to 8 romantic relationships, and, of course, 50 percent of marriages end in divorce.

Each of those events are considered by psychiatrists to be among the most stressful occurrences for human beings to encounter. As is well known, stress takes a toll on the body and mind. There are even assessments, such as the Holmes-Rahe Stress Inventory, that claim to prognosticate the likelihood of future physical or mental health “breakdowns” based on the accumulated experience of stressors. Though for me, “stress” feels far too intellectual, sanitized, and empirical a word to encapsulate the loss, confusion, loneliness, heartbreak, fear, numbness, anger, sadness, and deep ache brought about by experiences such as the ones above. We don’t really need loss to be quantified in order to know that it hurts and impacts our well-being.

Most obviously with moving, but often occurring with other endings or departures, there is an additional contributor of turmoil and distress: separation from place and a loss of community. As this article by Mindy Thompson Fullilove poignantly documents, having a sense of place creates a feeling of belonging, familiarity, attachment, and identity. “Displacement ruptures these emotional connections. The ensuing disorientation, nostalgia, and alienation may undermine the sense of belonging, in particular, and mental health, in general.” Displacement encompasses both the more quotidian forms, such as moving for a job; or the more drastic, yet increasingly common forms, such as migrating or seeking refuge from war, violence, ethnic cleansing, severe economic hardship, or “natural” disasters. I do acknowledge this piece largely neglects these latter forms.

That community is important is not exactly breaking news. Readers may rightfully point out that many indigenous peoples have lived this knowledge for millennia without instruction from the institutionalized social sciences and their academic journals. Anarchists may accurately point to our tenets of mutual aid and solidarity. Oppressed groups past and present experience the strength and resiliency created by struggling and surviving as a community. Yet knowing is not the same as being or doing, and even if one wanted to build attachment to a place and create a sense of community in it, such options are increasingly limited under the hyper-individualized, exploitative, alienating, and fear-inducing dominion of capitalism and the state.

In the U.S., nearly everyone lives geographically in a community, though primarily as a happenstance collection of atomized individuals and nuclear families residing behind locked doors and security systems amid divisions fomented by hegemonic sociopolitical forces. Being part of a community, the experiential phenomenon of interconnected inhabitants within a territory cooperating along communal lines, is something quite rare. Anymore, being part of a community usually refers to connecting with others based on a shared interest, most likely in the virtual realm, and not to cohabiting among others as our complete selves, warts and all. 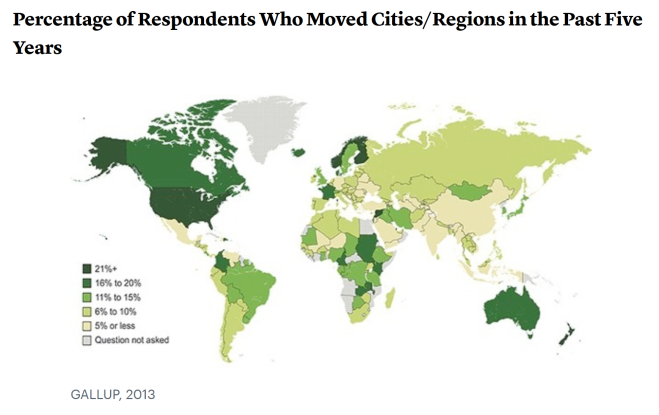 That such a situation exists is not by chance. Residents of the U.S. move more frequently than any other country in the world. And work is the reason behind more than 50 percent of those moves. Neoliberal capitalist institutions such as the World Bank find this to be a tremendous asset to capitalist expansion and an example that should be replicated elsewhere:

While precarity in housing and employment suits the needs of capitalism, they force us to repeatedly experience upheaval after upheaval on life’s spiral. As millions struggle to get by in this system, there is also the additional episodic hardship of starting over that brings additional physical and mental health implications along with it.

Cyclical transience also ruptures the well-being that comes with the feeling of belonging to a place and having a sense of community, especially when caused by forces such as gentrification. A population coerced into mobility in order to survive subsequently precludes the development of attachment to place and sense of community, thereby ensuring we remain fragmented individuals without the community connection that fosters well-being and offers the best means to organize and struggle together to meet our common needs and defend our interests. Again, this suits the interests of capitalism just fine.

As my journey down I-40 is now complete, I find myself experiencing the isolation and ungroundedness that comes with being in a new place, especially so unexpectedly. I reflect on the 15 or so moves I’ve made over my life, the connections left behind that did not have the time to fully flourish, the paucity of true relationships I’ve been able to maintain across time and geographies. For me, this repeated series of endings has yielded the sense of a more impoverished present. I mourn for what was left behind or what never had the chance to be, and yearn for the sense of belonging, safety, and stability offered by place and community. I have no solutions, just a recognition of myself again at this point on the spiral, the intersection of beginning and ending. It is a moment for reflection and intentionality. Perhaps that’s all this is, an analysis and offering to all of us traveling through similar moments and the proposal that we all deserve better than what this system offers.

4 thoughts on “The Remnants of Continuous Departures”