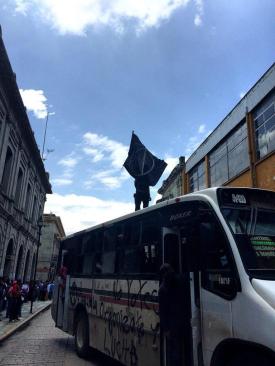 A bus serves as a barricade in the historic city center of Oaxaca.

On Sunday, June 7, midterm elections were held in Mexico. Well, the state attempted to hold elections. As it turns out, the people of Mexico weren’t having it. A vast majority – 71 percent in a poll I saw – did not believe that the elections would be fair. With rampant vote-buying, candidates with documented links to cartels, party-affiliated candidates running as independents, political assassinations, and an ongoing climate of impunity, massacres, terror and voracious capitalism, not many are enthusiastic about the direction Mexico is going in.

As well, the family members of the 43 disappeared students from Ayotzinapa Teaching School in Guerrero called for the elections to be boycotted unless the students were returned alive. Their argument being that a government which murders and disappears students, then criminalizes those demanding their return, and has known links to drug cartels is not to be trusted nor is capable of holding free and fair elections. The CNTE, the more militant wing of the national teachers union, joined onto the call, furious – among other things – with government moves to privatize education and introduce standardization and quotas.

The call to boycott elections turned into efforts to impede the elections from happening. Over the past week, especially in the southern rural, indigenous and poor states of Guerrero, Oaxaca and Chiapas, teachers and their supporters seized National Electoral Institute (INE) offices, burning voter rolls and hundreds of thousands of ballots. In Oaxaca, teachers also blockaded the airport and seized an oil refinery and gas stations around the state, dispensing gas for free.

Upon learning that people cared more for freedom than for the TVs his party was giving away in an attempt to buy votes, President Enrique Peña Nieto unleashed the Federal Police, the Gendarmerie, the army and the navy, with 20,000 federal forces invading the state of Oaxaca alone. The thing is, the people of Oaxaca have some experience when it comes to defending themselves from the army and police – as almost nine years ago to the day a police assault on a teachers’ encampment set off a five-month uprising in the state. So they entrenched themselves and got to building barricades. The potent slogan from 2006, “To the barricades – close the streets, open the way,” was resurrected. (Which itself was modified from the slogan from the May 1968 uprising in Paris of “Barricades close the street but open the way.”)

Saturday, June 6, saw intense resistance from the teachers and people of Oaxaca, as in many places attempts by the armed forces to reclaim occupied government facilities were repelled over and over again. In Miahuatlán, for example, clashes lasted for 11 hours before government forces were able to take back the local INE office. A favorite image of mine was seeing Oaxacans push back the army in Huajuapán, fists raised, singing “Venceremos” (“We Will Triumph”).

On Election Day, June 7, the repression continued, with dozens of arrests reported in Guerrero and Oaxaca. In Oaxaca, gunmen affiliated with the COCEI-PRD party in Juchitán opened fire on the community assembly of Álvaro Obregón, wounding six. In Guerrero, at least one teacher was killed when federal police opened fire on a demonstration in Tlapa.

Despite the federal invasion of Oaxaca, I saw reports that only half of election sites opened on Sunday and that vote-casting was sparse. We will never have an accurate tally of the how many people voted, for who (or if they cast a null ballot), and who won. But that is largely beside the point. Even if the voting went completely unprotested, we would still not have an accurate tally, which is precisely why the election was such a farce to begin with.

A group of civil society organizations in Oaxaca released a statement on Saturday entitled, “In a true democracy, it is not necessary to ‘safeguard’ elections.” Indeed, it is not the election itself, but the contestation of the idea of holding elections that the discussion of democracy should orient around. The rejection of the state’s elections shows that there is democracy in Mexico, it just doesn’t come in the form of a vote for the PRI, PAN, PRD, PVEM, or even MORENA.

“Where do I vote for them to leave?” In front of the INE in Mexico City.

Enforced elections under siege and at gunpoint is not democracy, but spectacle and coercion. The teachers and others in Mexico have a lesson for us, that democracy is not equivalent with voting. In fact, it may appear as just the opposite. The collective rejection of the electoral process of a narco-state is a rejection of the legitimacy of the very state – at least as it is currently constructed. This is why the government so fears the electoral boycott – it is desperate to appear legitimate, yet it only knows how to speak with force and impunity. Under the current system, legitimacy means democracy means holding elections means sending tens of thousands of armed forces to crush dissent in the name of democracy. The resounding “NO!” that interrupted that process in Mexico this past week shows the possibility of another way, of other options.

It is now June 8, meaning the spotlight will soon shift elsewhere. But the struggle is not over. Immediately, there are the prisoners, the wounded and the dead to tend to. There is the repression that will continue, perhaps more fiercely now that the elections have passed. But there is also the example of resistance and rebellion shown by the teachers and other anti-election activists in Mexico. Utilizing a variety of tactics, their rejection of the mirage of democracy as voting exposed, yet again, the true impulse of the Mexican state – to impose its will by force, Mexicans be damned. To riff on Malcolm X, when faced with the bullet, the people burned the ballot. That fire expanded the crack in the façade of the state as legitimate and omnipotent. May it continue to grow.