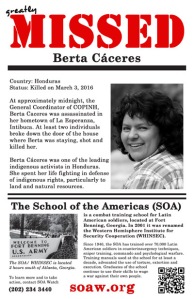 Translator’s note: On April 1, Gustavo Castro was permitted by the Honduran government to leave the country and is now back in Mexico.

Relatives of Berta Cáceres report that the Attorney General is protecting the murderers. There are economic ties between the coordinator of the prosecution and DESA’s lawyers [the company behind the Agua Zarca dam]. They claim that the Honduran State knew of the plan to murder indigenous leader Berta Cáceres.

The relatives of Berta Cáceres, the COPINH [Civic Council of Popular and Indigenous Organizations of Honduras], the Platform of Social and Popular Movements of Honduras (PMSPH) and the Popular Coordination Berta Cáceres, for the ears of Honduran society and the international community, we are writing you to express and demand the following:

It is about to be one month since the crime against Berta Cáceres and Gustavo Castro. To date, what we know with certainty is that you, as leading figures of the government and the Honduran State, failed in your duty to protect the life of Berta, despite repeated reports of death threats, and that since 2009 the CIDH [Inter-American Commission on Human Rights] informed you that she faced real and serious risks and requested that you protect her. That is to say, you are now responsible for this crime and we hope that one day you will be judged.

Following the crime against Berta and Gustavo Castro, several matters have come to light that require your explanation and clarification, but this must first be done for the victims and later to those who will judge you. Among the main points to be clarified are:

Who came up with the hypothesis (the only one you have made public), that the crime against Berta is related to a personal or internal conflict within COPINH? What actions have been taken regarding those public officials who failed or did not comply with their obligations to protect Berta Cáceres? What actions have been initiated against the police, prosecutors, witnesses and other persons who in the hours following the incident had already solved the case, with obvious falsehoods, and insisted on accusing anyone, for the purpose of generating impunity and lessening the national and international pressure that the crime had caused? What actions are underway regarding the tampering with of the investigation and the crime scene that has been publicly reported by several figures, among them the victim Gustavo Castro? Why do you insist on holding Gustavo Castro in the country and continuing to violate his human rights, when he has cooperated with the investigation and is willing to continue cooperating from his home in Mexico?

Why aren’t you responding to the requests made by the daughters, son, mother and other relatives of Berta? Why aren’t you accepting an independent commission led by the CIDH, who can help investigate the crime? Why are you, through your legal representatives, prohibiting the active participation of the victims in the investigation?

What are you hiding? What do those covering it up fear? Why do you insist on continuing to violate the rights of the victims?

What role is the FBI playing in the investigation of the crime? How have they intervened? Who and what types of skills and experiences do those who are supposedly collaborating with the Honduran authorities have? Are those FBI agents involved in the investigation there in order to ensure the impunity of DESA, USAID, the U.S. Embassy in Honduras, and you, as the government? How do you explain and what are the terms of the cooperation agreement between USAID and DESA, the licensee of the Agua Zarca hydroelectric project and the main suspect in conceiving and executing the crime against Berta?

How do you explain the independence of the investigation when the current head of the prosecution, Arturo Duarte, an active participant in the investigative process, has been a partner at the law firm that represents DESA and filed charges against Berta in the courts in La Esperanza in 2013? Do you believe that he could hide the fact that DESA’s lawyer, Juan Sánchez Cantillano, has been a partner and personal friend, and that this constitutes a clear source for the contamination and manipulation of the investigation?

Your behavior and the doubts outlined above give us the right to believe that you not only failed to protect Berta, but that you may have known of the plan to murder her and today are part of the plan to keep the crime in impunity. That is to say, all of the State’s actions and omissions regarding the case of Berta Cáceres allow us to assert that there exists an express will of the State to ensure that justice is not done.

We wish to affirm that, as victims: the family, COPINH, PMSPH, and the Popular Coordination Berta Cáceres, we are determined to seek and obtain the truth and justice for this crime.

That is why we urge you to address the requests that the victims have already placed on your desks:

We demand that you cease the campaign against Berta’s family, COPINH, and the Honduran social movement. The culprits of the human and economic failure this country is living through are you, together with a political-economic class that has been leading the country to point of corruption, violence and ineptitude.

Finally, we reaffirm our unwavering commitment to continue insisting on and contributing to our Honduras where justice and dignity are daily occurrences for the victims, we who are the great majority of Hondurans.