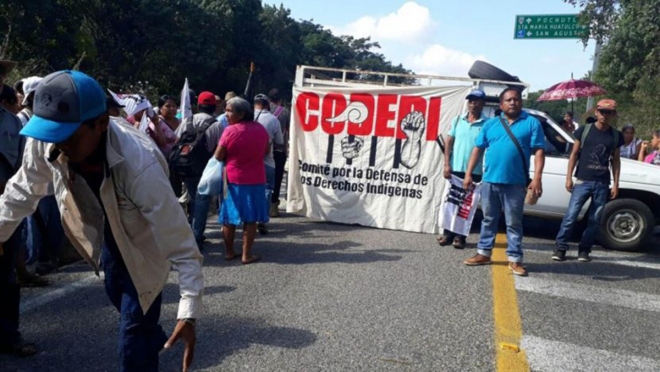 A CODEDI highway blockade in November 2017.

Below is a translation of the most recent statement from the Committee for the Defense of Indigenous Rights (CODEDI) following the ambush and killing of three of their members last night. In the audio interview below, Abraham Ramírez Vázquez, the head of CODEDI and former political prisoner, states the ambush was orchestrated by the judicial police (the armed wing of the state prosecutor’s office) and was ordered by the governor of Oaxaca, Alejandro Murat. For background on CODEDI and its origins in Santiago Xanica, see this article.

The organization CODEDI (Committee for the Defense of Indigenous Rights) is an autonomous organization that works for the indigenous communities of the Southern Mountains, Central Valleys and Coast of Oaxaca, in solidarity with all just causes. We currently work with 50 communities, creating the dream of living in autonomy through daily practices, with more than 20 years serving the peoples of Oaxaca. We are part of different alliances in the state, country, and world; alliances based in processes of autonomy and struggle. The leader of our organization is Abraham Ramírez Vázquez, an indigenous leader from Santiago Xanica who was imprisoned from 2004 to 2011 by order of former governor José Murat, the father of the current governor.

Yesterday, Monday, February 12, 2018, the State Interior Ministry of the government of Alejandro Murat Hinojosa called us to a meeting about an internal matter relating to the political processes of Santiago Xanica. Minutes after the meeting ended, our compañeros went to eat, leaving the city of Oaxaca for the coast, to our communities, at around 7pm. Arriving in Miahuatlán on Oaxaca Pacific Highway 175, at kilometer 112, our compañeros were ambushed at around 10:30pm by a judicial police-type group of heavily armed gunmen with high-caliber weapons. From a green truck they shot up our truck with the intention to kill. It was an ambush that left three members of our organization murdered at the hands of this group controlled by this murderous government.

We hold the state and federal governments responsible for any harassment, intimidation or reprisals and we ask from a place of solidarity for mobilizations to demand justice for our two minors and one adult compañero who were killed.

1st Gathering Point: For CODEDI in Miahuatlán de Porfirio Díaz, outside the cemetery at 10am.

2nd Gathering Point: Downtown Bahías de Huatulco at 2pm. Alongside their families, we will say goodbye to our murdered brothers.

Don’t stay silent. Our tenderness will always be the solidarity among peoples, organize and fight, never again a Mexico without us!