Originally posted on It’s Going Down, below is the first entry of what will be a regular column I’m writing for that site, providing new and analysis of social movements and struggles in Mexico. Esta nota también está disponible en español en El Enemigo Común. 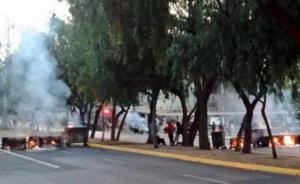 Welcome to the first edition of “Insumisión,” a new regular column here on It’s Going Down, bringing you news and analysis from social movements and struggles in the territory referred to as Mexico. Let’s get started.

As readers of It’s Going Down might already be aware, in Mexico City last Wednesday, Yorch, a member of Okupa Che, was kidnapped by police in the latest round of repression to face the autonomous, anti-authoritarian space on the campus of the National Autonomous University of Mexico, held since the 1999-2000 student strike. Police planted a backpack full of drugs on Yorch, who is now captive in a federal prison in Sonora. The morning after the arrest, compañerxs blockaded access to UNAM with burning dumpsters, and Molotov cocktails were unleashed on the UNAM Campus Security offices and patrol cars. The clamor to evict Okupa Che has steadily grown since Yorch’s arrest. Okupa Che released a statement, calling for solidarity and for people to be on alert to respond to any eviction attempt. Anarchist political prisoner Fernando Bárcenas (who received acts of solidarity from Tijuana to Bloomington earlier this year) sent an open letter in solidarity with Yorch, which reads in part:

It is not my intention to send a message of sympathy or pity, on the contrary, I intend to send a message of war, insurrectionary love and solidarity…In the streets or in the jail, we have to do nothing more than keep moving forward until all are free…Although along the way we stumble upon death…Unconditional and revolutionary solidarity with compa Yorch, prisoner of war…