Originally published on It’s Going Down 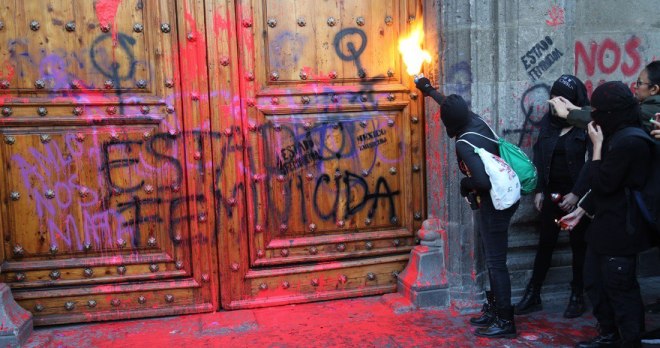 I want to pause and think about the correct words and also recognize the linguistic paralysis produced by the maelstrom of femicidal violence. Because this is not the first time the tsunami of immediacy has removed the possibility of stopping to reflect on the importance of choosing the words with which we form our discourse. And, I assume, I am not the only one who in the urgency to speak cannot even name what or how much it hurts while I try to reflect more deeply on what we are living through.

Among the feminist reflections sparked by the atrocious femicide of Ingrid Escamilla, there is one that barely resonates and is worth lifting up: we face the abandonment of being citizens of a femicidal state to which we continue to confer our security despite it repeatedly proving itself to be the very perpetrator of violence against women and the propagator of hatred against women.

Perhaps for this reason it is a priority to escape from the paralysis of language and name it for what it is: a femicidal state. Until such words turn into awareness and political action.

It’s not that right now there are not very important women’s initiatives that oppose this violence through mobilization and political action, but that the cycle of collective catharses, of reacting to violent event after violent event, loses its effectiveness if we forget to identify where the violence we oppose is coming from. If we leave that out, any mobilized force, no matter how broad, will end up being absorbed either by the institutional circus that will never solve patriarchal violence or by the inertia of the whirlwind that burns out or kills.

Let’s not forget that in implicating these institutions we must go beyond the demands for justice and for punishment of the perpetrators. It must be said loud and clear: the actors from whom we demand protection, solutions, or [at the very least] empathy are the very perpetrators of the crimes.

The criminals are the public officials who shared the images of Ingrid’s body and surreptitiously recorded the femicide in order to hinder legal proceedings. The criminals are the journalists without any ethics who disseminated the images, mocked violence against women, and spread the misogynist rhetoric that perpetuates it. The criminals span from the president, who dismisses a social problem that affects half the population of the country he leads, to the owners of the media outlets who enrich themselves at the cost of reproducing the spectacle of “contemporary horrorism,” a term from Mexican historian Cristina Rivera Garza.

I seek out and return to those texts by the author from Tamaulipas that almost a decade ago helped me absorb the flood of violence that resulted from the militarization of the country, when – again, as before – the word barbarity falls short. “It’s often difficult to write about pain,” she presages as she begins to test out possibilities for making sense out of that which we identify as senseless in Dolerse, Textos desde un pais herido (To Be Hurt: Texts from a Wounded Country). And I think about the incredible act of survival that we’ve been carrying out for some time now in Mexico. About what – in the midst of so much and of everything – writing means and reclaims; it’s what makes me return again to the importance of language.

Nine years ago, Rivera Garza collected in this book reflections on writing in the face of horror – “the most extreme spectacle of power” – in a Mexico that ended the first decade of the 21st century embroiled in a brutal war that, although it continues today, has been placed in the background by the political elite.

Now that this war manifests itself more clearly as one against the territory of women’s bodies, the feminist movement appears to be one of the few forces at the national level with sufficient strength to continue unmasking the femicidal state. But the onslaught intensifies when they take Ingrid from us, and Isabel, and Raquel and so many more, day after day, sending a message of impunity and absolute defenselessness.

“Pain is a complex phenomenon that, for starters, questions our most basic notions of what constitutes reality. Pain paralyzes and silences, it’s true, but it also saturates the human experience…,” writes Rivera Garza, who I bring up – although she doesn’t have a feminist approach – because she is one of the most brilliant essayists of the contemporary Mexican tragedy.

That grieving society of which she writes is the same one that today faces, as an echo of the previous shock, a femicidal violence that grows more heinous every day. But that pain which can paralyze, silence or saturate the human experience, “on occasion, frees it, producing voices that, in their depths or delirium, invite us to visualize another life, fully implemented alongside others.”