After two weeks on hunger strike, due to the health of some and in order to avoid serious complications, anarchist prisoners Fernando Bárcenas, Luis Fernando Sotelo and Abraham Cortés, as well as activist Jesse Montaño, have decided to continue their collective struggle inside the prison with indefinite fasts and have ended the hunger strike.

We are reposting the text signed by Fernando Bárcenas. 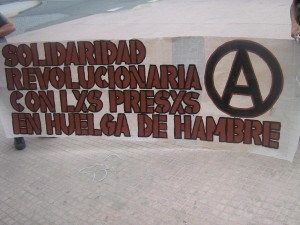 From the skin inwards, we are in command of ourselves!

To the rebel compas:

First of all, I would like to send greetings to all those who stood in solidarity and complicity with this battle.

The days of struggle cannot continue to be temporary, nor led by revolutionary vanguards. There is no sense in unifying all rebel forces in homogeneity, unless fascism is the goal.

If instead our basic perspective is broader and we recognize that we are not the center of the universe but rather a part of it, we will have many more possibilities to spread our proposals and ideas.

In this sense, the hunger strike that we four compas began in the North and South Prisons was meant to be a way of reaffirming this position of self-determination and questioning; of negation. A way of saying: “From the skin inwards, we are in command of ourselves!!”

That’s why starting today, Thursday, October 13, we have decided to end the hunger strike due to the deteriorating health of some compas who have participated in other strikes and who as a result run serious risks of irreversible damage to their health.

However, we have decided to indefinitely continue fasting every day until 2pm to continue our condemnation, solidarity and extension of revolt, which we know is everywhere, at all times and places.

So, we continue to face the enemy with potentially explosive acts, from a place of rejection and permanent, daily conflict.

So that all our days on this immense prison called earth turn into informal and permanent days of war against power, for its definitive and total destruction.

The law is a device that castrates the capacities of humans; that thinks, directs and creates our lives for us, and such a concept involves the mutilation of the most unique and authentic part of us.

That’s why the one who decides to take their life into their own hands at the margins of this rotten machine is seen as “weird”, “anti-social”, “criminal”, etc.

We can’t come up with solutions within “democratic frameworks” that through policies of extermination intimidate their inhabitants with displacement, violence, and death.

I’ve heard rumors about an amnesty promoted by some political parties and institutions and believe it is necessary here to clarify my stance rejecting all forms of manipulating people’s energies just to maintain order. Some believe that an amnesty could address people’s concerns, shattered into pieces by the imposition of wealth at the cost of economic slavery. We don’t want “to leave” one prison to enter another. We want to be truly free, outside of their virtual realities, and if that means destroying their society, we will do that believing that something new should be born to forever bury this rotten civilization that forces us to be automatons and gears of machinery…

“Political struggles” don’t matter if they’re not part of the permanent conflict that exists everywhere. They can imprison us but they will not stop the revolt. Angry neighbors go into the streets to reject development projects that cause evictions and forced displacement for thousands of families who don’t have sufficient means to get by when public space becomes privatized. The privatization of water is another clear sign reflecting how the powerful truly regard us. Modern slavery, deranged and sweetened with luxury items, drugs, and other capitalist aspirations.

We don’t need amnesties because we don’t want or need laws to govern our lives; the mirage of progress makes us believe that the state and government are necessary and therefore we don’t directly notice the signs that we are becoming complicit in the slaughter of our peoples…

We want to see the insurrection spread everywhere that destroys centralized power, the common yoke that all of us poor carry on our backs.

We salute acts of insubordination to the international standards of living that seek to turn us into efficient pieces of their machinery.

We, the marginalized, we are the ones who bear the weight of this society, and as we are no longer needed in their technological society, they justify our massacre through informal wars on drugs in places where, curiously enough, people have traditions and communal ways of life different from those of the state.

Anyone who lives in a poor neighborhood is aware from childhood that the drug business is semi-official, that is, with the establishment of a mafia as a corporation that regulates control of the territory while the police behave according to double standards, supporting the efforts of the mafia, ensuring its smooth functioning. As such, the mafia appears as a sub-police that regulates not only the flow of drugs, but all formal and informal businesses that exist in the territory. But, if this arrangement starts spreading massively it is because of its origins in drug trafficking; just one more business in the capitalist hydra.

A capitalist will always be a voracious and predatory monster, be they engaged in “legitimate” or so-called “illegal” businesses. Capitalists are driven by an insatiable desire for profit. They will do anything for money and that is why relations between “legitimate” capitalists and “organized crime” are so close.

We can’t entrust our lives and that of our loved ones to the state/mafia, they are responsible for the genocide and slaughter that we breathe daily. As anarchists, we are carrying out a war against power, against all that tries to delimit individuals and distance them from themselves.

That is why we burn their facilities, we sabotage their communications and we attack the symbols of their societies. We storm their cities because urbanization is the highest altar to mass incarceration, to the privatization of economic resources. Public transit is a symbol that reminds the marginalized that they are not welcome in the great urban centers. The rate hike for the metro, the monopolization efforts by this same company to capture the entire city’s mobility market with its Metrobus prototype, are signs of the complete privatization of cities.

Prison is the common space for all in this era of technology, which is why we should build paths and routes that will help us live at the margins, reinventing our lives daily and taking ourselves back.

At war until we are all free.