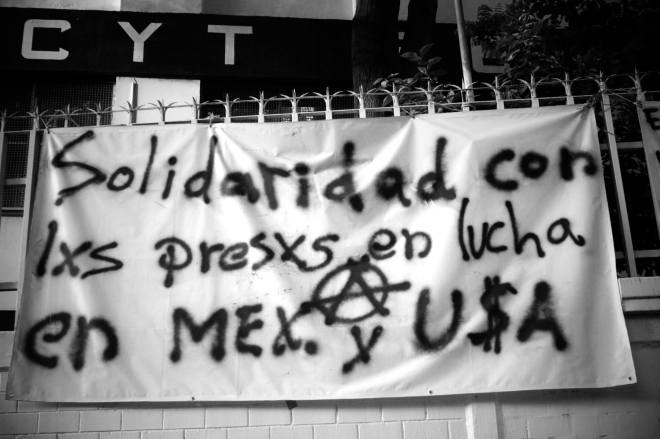 After two weeks on hunger strike, due to the health of some and in order to avoid serious complications, anarchist prisoners Fernando Bárcenas, Luis Fernando Sotelo and Abraham Cortés, as well as activist Jesse Montaño, have decided to continue their collective struggle inside the prison with indefinite fasts and have ended the hunger strike.

We are reposting the text signed by Fernando Bárcenas.

END_OF_DOCUMENT_TOKEN_TO_BE_REPLACED

During a press conference on September 28, anarchist prisoners announced the beginning of an indefinite hunger strike. They are compañeros Fernando Bárcenas and Abraham Cortés, prisoners in North Prison, Luis Fernando Sotelo, prisoner in South Prison in Mexico City, and Miguel Peralta, prisoner in Cuicatlán Prison in Oaxaca. The strike is in rejection of the 33 year and five month sentence given to Luis Fernando Sotelo, to mark three years since the arrest of compañero Abraham Cortés on October 2, 2013, and in solidarity with the prison strike underway in the United States against the exploitation of prisoners’ labor and in support of the revolts against the killings of African-Americans by police in the U.S.

The three compas in Mexico City have gone on hunger strike, while Miguel will go on fasts.